ARE YOU NEW TO WRESTLING? 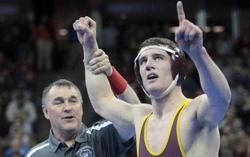 The Road Map to Being a High School State Champ

I am often asked a question like, “What can we do for Billy to take his wrestling to the next level and be a state champ in high school someday?” You would think that would be an easy question to answer and the same answer would apply to every kid in the club but it doesn’t. I will tell you this; the biggest factor in Billy taking his wrestling to the next level and position himself to win a state title is Billy himself. Does he want to and be willing to pay the metaphorical price to take that next step? “Wanting to” and “willing to” pay the price are two different things and there is typically a big disconnect between the two. I see all too often parents wanting success more than the kids and that imbalance usually ends with the parent pressing too hard, being wound too tight, crying kids in the practice room or at tournaments and eventually the kid burns out and quits wrestling around the 6th or 7th grade.

For the sake of this piece, however, let’s assume our Wildcat friend Billy does indeed want to be a high school state champion down the road and is extremely motivated and wants to pay the price to be a high school state champion and his parents are supportive and willing to do whatever it takes for him to accomplish his goals. Let’s also assume Billy has the engrained “fight” that is needed to excel in a combat sport like wrestling and has, from an early age, decent coordination and body control. Yes, these are big assumptions and Billy would truly be a special kid, but let’s be honest, that’s why it’s so hard to win a D1 state championship….these foundations need to be in place from the get-go. Below is a blueprint for Billy to follow that will put him in a position to win a state title for West Bend East or West.

To many, the aforementioned blue print will be considered extreme or over-the-top. To be honest, it is. But that is exactly why there was a 22 year time span in between state champs in the West Bend community. It takes a special kid, with all the tools, with all the support and all the motivation applied over 10+ years in an extreme and over-the-top way. Certainly not for everyone….just for a very few. I wonder who will be next. Is it you?

I was asked recently by a youth football coach to reach out to the families his team to communicate the benefits of the sport of wrestling and how it is the #1 “off-season” training you can do as a football player. I’ve had the privilege of coaching several of the student/athletes on this team and every other youth football team in West Bend. Sitting in the stands watching all the East/West games a couple weeks ago it became clearly apparent of what wrestling can do for football players. We constantly heard wrestlers being called out over the intercom for long runs, making tackles for losses, touchdowns, sacks, etc. Every other name was a wrestler. Same thing for the East vs. West High School game, wrestlers from both schools are hammers on their respective football teams. This phenomenon isn’t unique to West Bend. Looking at the rankings for top football teams in the area, they are populated by high schools with strong wrestling programs.

There are countless reasons why wrestling benefits your performance on the football field, some are more obvious than others like speed, strength, conditioning, leverage, foot work, technique, hand fighting, etc. But from my observation, it’s the intangibles that are developed in wrestling that really take your football to the next level such as emotional intelligence, aggressiveness, personal accountability, being coachable, being humble and being a positive influence on your teammates.

If you are not in a sport following your football season, I highly recommend you consider signing up for the Badger Wrestling team and/or the Wildcat Youth Wrestling Club. My promise to you is that it won’t be easy and it’s not for everyone. Worst case scenario is that you try it out and you decide it’s not for you and you are a better person for trying something new. Best case scenario is you fall in love with the grind of intense training, get addicted to spirited competition, and become engulfed in a sport that will accelerate your football performance exponentially.

Recently I was asked by a parent whether or not his son should continue to wrestle.  A Junior, for a good football program in NY, he was already receiving several scholarship offers from Division I football programs.  The father felt that his son benefited from wrestling but the son felt that he should just focus on the sport he was going to play in college.  The father asked me to outline the benefits of wrestling for football players and attempt to “prove” to his son that his scholarship offers would only increase if he continued to wrestle his last two seasons.  I happily agreed as there is no doubt that wrestling greatly benefits football players on all levels.

Wrestling is one of the most physically demanding sports that any athlete can partake in.  It is a total body sport requiring athletes to be flexible, strong, explosive, agile; to have a great sense of balance; and have the level of conditioning that rivals any other endurance sport.  Wrestlers, through the course of their training and competition, are often subject to physical discomfort and pain at a level that far exceeds most sports.  These skills benefit football players at all levels, from the ability to move laterally, keep a man in front of you and close the distance quickly, to driving a 225lb running back into the ground and forcing the fumble.  There is no doubt that a wrestler’s physical-ness is a skill set desired by all coaches.

“Wrestlers make coaching football easy, they have balance, coordination, and as a staff we know they are tough.”  -Tom Osborne College Hall of Fame Coach for the University of Nebraska.

Weight management, the discipline to maintain a healthy diet for 6 months or more out of the year, the drive to give a 100% every practice, and the drive it takes to wake up early every day to get an extra run in are just some of the mental skills that it takes to be a successful wrestler.  But none compare to the mental toughness it takes to walk out on a mat, alone with no teammates to help you win and take on an opponent one on one.  Nothing compares to that feeling; whether  you have a broken finger, bruised ribs, strained or torn knee ligament, a wrestler knows that for 6 minutes nothing else matters but putting his opponent on his back and getting his hand raised in the end.  What football coach wouldn’t want an athlete on their team that is always going to give them 100%  An athlete that they never have to tell, “hit the weight room,” or “you should get extra laps in after practice?”  A true wrestler always wants to be the first to arrive and the last to leave.  A wrestler is self-reliant and will never blame his teammates for his loss.  Wrestlers are mentally tough.

“I draft wrestlers because they are tough, I’ve never had a problem with a wrestler.” –Joe Gibbs Hall of Fame Football Coach.

Hand eye coordination, proprioception and anaerobic conditioning are three skills that are vital to both wrestling and football player!  The definition of proprioecption is, “the ability to sense the position and location and orientation and movement of the body and its parts.”  It utilizes all of the senses in the body.  It is the ability to know where your body is in the space you are in, without having to look at your body.  In other words, when a wrestler is in a scramble and his head is stuck underneath his opponent and without looking he is able to move his whole body, all four limbs, often in different directions at the same time, while simultaneously keeping track of his opponent’s entire body and staying in-bounds to finish the takedown; this is proprioception.  On a football field an offensive linemen, for example, has to keep track of the man in front of him, his body, the bodies to his right and left and the quarterback behind him all at the same time.  A wrestler is forced to hone this skill every day in a competitive practice environment.  This repetitive practice can only benefit a football player.

“I would have all of my offensive linemen wrestle if I could.” –John Madden, Hall of Fame Football Coach and Broadcaster

Anaerobic conditioning is defined as as your ability to perform at a rate faster than can be met by oxygen supply.  Short bursts of intense exercise tax your anaerobic system.  Wrestling is a combination of Anaerobic and aerobic metabolisms however, it relies heavily on anaerobic conditioning within a match or tournament.  It is because of this that wrestlers are often saught after by football coaches because they are in superior shape to athletes who do not work their anaerobic system.

“Once you’ve wrestled, everything else in life is easy.” –Dan Gable Hall of Fame Wrestler and Wrestling Coach

Influence of Wrestling on the NFL:

Which has this nice little bullet point list of reasons to wrestle and play football:

1. Agility–The ability of one to change the position of his body efficiently and easily.

2. Quickness–The ability to make a series of movements in a very short period of time.

4. Flexibility–The ability to make a wide range of muscular movements.

5. Coordination–The ability to put together a combination of movements in a flowing rhythm.

7. Muscular Power (explosiveness)–The ability to use strength and speed simultaneously.

8. Aggressiveness–The willingness to keep on trying or pushing your adversary at all times.

9. Discipline–The desire to make the sacrifices necessary to become a better athlete and person.

10. A Winning Attitude–The inner knowledge that you will do your best – win or lose.

Once You've Wrestled Life is Easier

New to Our Organization

Interested in becoming a sponsor of West Bend Wildcats Wrestling?

Want to participate in your local community like Ahrens Heating & Cooling is? Become a  sponsor for West Bend Wildcats Wrestling and support youth in your area.

Want to participate in your local community? Become a  sponsor like Ward Kitchen & Bath is for West Bend Wildcats Wrestling and support youth in your area.

Want to participate in your local community? Become a  sponsor like Highland Builders for West Bend Wildcats Wrestling and support youth in your area.